Last week Slate and the New York Times reported on Still at Risk: What Students Don’t Know, Even Now, a just-released Common Core survey that sheds dismal light on the basic factual knowledge of today’s high school students in areas such as history and literature. I’m not particularly surprised by the findings – the authors attribute much of the blame to the test-and-run mentality created by the No Child Left Behind act. A sample of the results drawn from the responses of 1,200 17 year-olds: 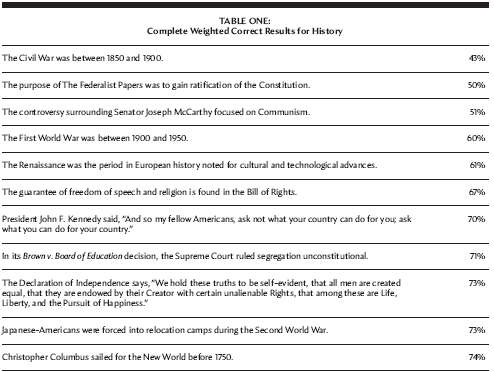 The table below suggests that in literature students didn’t fare much better.

Although widespread factual ignorance among high school students may be nothing new, this report is evidence of the growing consensus that No Child Left Behind is making it worse. The

instructional technology master’s program I’m enrolled in is full of K-12 teachers who complain bitterly about the lengths to which they are pushed to teach a soulless curriculum that bleeds both interest and engagement out of the educational experience. The high financial stakes of public school standards testing has to varying degrees transformed the classroom methods of these teachers, who report growing student frustration and lack of interest in the years following prescribed NCLB curricular revisions. According to them, a general culture of stress and competitiveness filters from top administration through principals to teachers and students as a result, obscuring course content and pedagogical creativity in favor of scores and rankings.

How does this affect our relationship to the incoming generation of college students? As rote memorization gains the greatest foothold that it’s had in American classrooms for decades, public school students are less likely to be exposed to the type of critical thinking and analytical skills that are fundamental to information and media literacy. In addition to an increased concern for promoting these literacies, librarians should also be questioning the assumed knowledge on which many of our daily reference and instruction interactions are based. How many times have you blazed through a class firing off authors and historical examples that you assume are common knowledge? This report indicates that library and technology jargon may be the least of our worries.