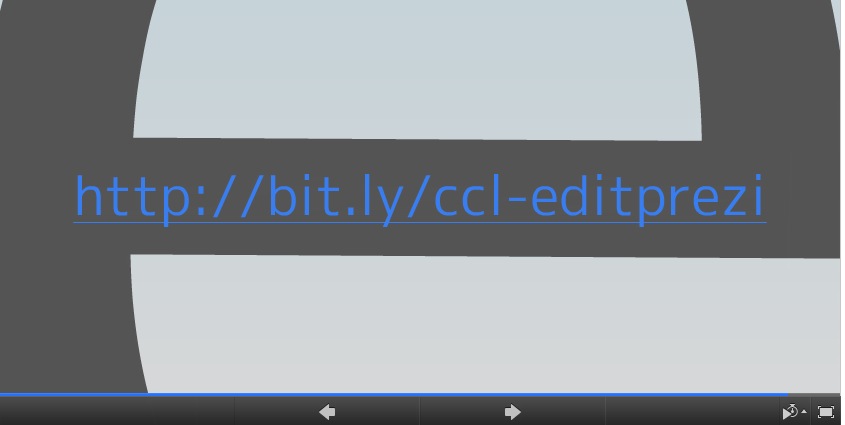 Recently I’ve been reminded how effective consensual group hacking/editing can be when teaching (about or through) web-based presentation and authoring platforms. I am a big believer in the techno-pedagogical strategy of transparent co-creation and exploratory play, which can diffuse the anxiety and confusion that often attends learning a new tool (especially one that involves the additional stress-inducing content area of design). This post describes three examples of productive collaboratage from my own recent teaching/learning context.

I led a face-to-face drop-in Prezi workshop for Claremont students/staff/faculty/librarians earlier this week that featured one simple (and eminently stealable) application of this strategy. In my opinion, the collective eye has become so accustomed to (and tired of) the bulleted Powerpoint format as to be trained to overlook it almost entirely – refer to the well-known work of Edward Tufte for more on this front. Don’t get me wrong: I use PPT 2011 for Mac for the majority of my own presentations, but I have found that wiping the slate completely clean of templated formatting and instead using creative combinations of images, shapes, and open fonts (see 1 and 2) is the only way to make them look innovative and interesting.

Which, of course, takes time. If I don’t have enough time to work from a wiped slate and have web access, Prezi provides a fast and freemium alternative method of creating a fancy-looking presentation (there’s a for-pay desktop version as well). This is even easier to achieve thanks to a recent Prezi interface overhaul that includes a much-augmented set of templates and themes, including an import-from PPT feature. Because I tend to use Prezi when I need to create an impressive-looking presentation in a short amount of time, I framed the workshop as a practical hands-on intro that also presented a critical comparison to “traditional” (e.g., linear and slide based) presentation platforms.

I have found that for a group of learners relatively inexperienced with its interface, Prezi can be difficult to teach hands-on due to its non-intuitive approach to spatial sequencing that is quite different from most presentation software. Therefore, anything one can do to make its interface more accessible and its introduction lower-stakes is a great facilitator.

Which is where collaboratage comes in. My lesson plan for a 75 or 90 min Prezi session is simple. I ask registrants to create a free Edu account before arriving to cut down on administrivia, and, after engaging all comers in introductions and an exploration of experience levels and workshop expectations, I give a brief 10-15 min presentation that models Prezi’s strong points (crisp/simple graphics and spatial rather than linear organization) and weak points (nausea-inducing zoom/pan) and gives an overview of its interface and basic areas of functionality.

I end the presentation with a shared shortlink 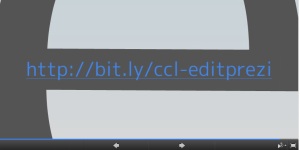 that invites participants jump into the Prezi I just gave as authors, and then I challenge them to edit the hell out of it for the next section of the workshop. I jump in through my account as well (snafu warning – only 10 collaborators at a time!) and continue to point out different editing features, all the while watching the presentation itself go absolutely nuts in real time.

The before and after images below are static but link out to my Prezi account due to WordPress embedding issues (sigh). This is what we started with: 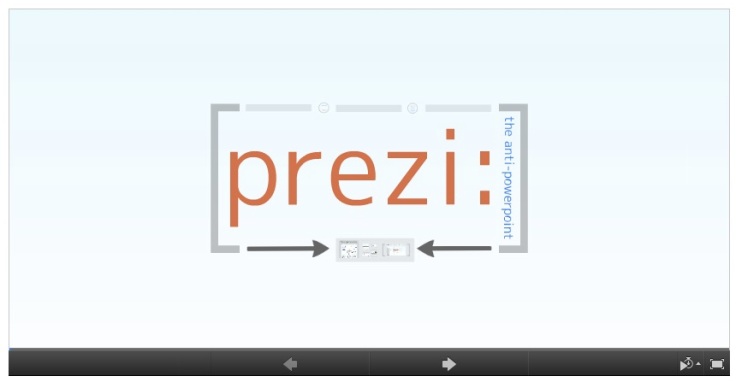 And this is what we ended with: 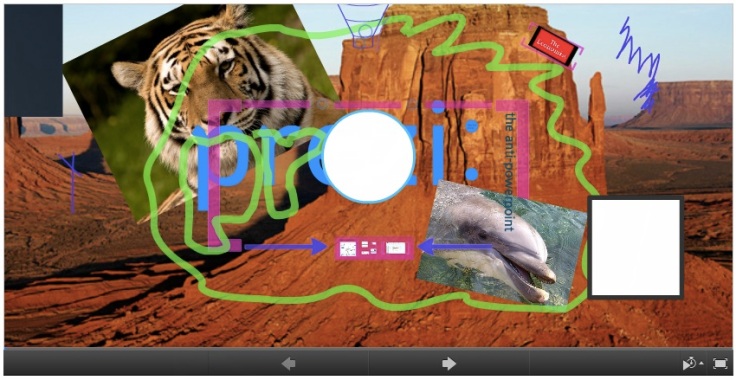 Voilà, super fun. The final 10-15 minutes of the workshop involves people creating their own Prezis from scratch, which they are far more prepared to do after having played around in an existing one with full license to mess things up. I first used this strategy in 2010 in a staff training at UC Berkeley, where it produced an similarly hilarious effect and had participants deeply engaged in exploration.

In all, this is a simple and effective way to reduce performance/design anxiety among participants while leveling the playing field, and translates well to many other creative software platforms that allow group real-time editing. This example comes from a f2f setting, but it could also be successfully applied in a synchronous digital environment.

Aside: One of the most rewarding projects I’ve worked on at Claremont has been revitalizing the drop-in series that features this Prezi session, which we call (Love Your) Library Workshops. When I arrived a few RefWorks sessions were offered per month, but 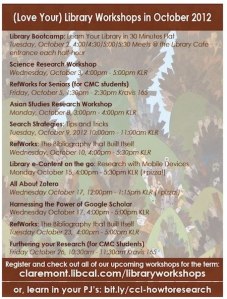 we have since expanded to a robust slate of (frequently but my no means universally) well-attended research and academic tech-focused workshops on things like comparing citation software, research with mobile devices, and authority/credibility. In my experience drop-in programs like this are something of an awkward stepchild in the instructional realm, but we’ve had a lot of success through a combination of creative marketing, keeping the sessions democratic and open to all comers, managing sessions and registrations using free version of LibCal (Springshare, I love you!), creative arm-twisting on my part to drum up instructors, a common end-of-session evaluation, and (of course) sexy workshop titles. I’ll do a longer project curve post on this in the future, but suffice to say it has been triumphant to build this series into a sustainable and dynamic instructional platform/marketing campaign with my colleague Natalie Tagge (I will be speaking about our DIY marketing adventures at ACRL 2013).

Group editing also provides excellent fodder for active research in a digital or f2f classroom setting. Another recent (and admittedly less sabotage-oriented) application of collaboratage came in an Environmental Analysis capstone workshop my colleague Sean Stone and I developed a few weeks ago, which involved small groups working on open Google docs that we created to facilitate strucured project inquiry during the session and beyond. (1) This class is a seminar attached to a semester-long client-based group project that produces a an EA-focused deliverable for a community stakeholder. In contrast to the traditionally academic thesis that the same students produce and publish in Scholarship @ Claremont (our  OA repository) in fall, the info-gathering tasks involved in this context are far more application and action-based and geared toward demographic, on-the-ground, and market/industry research (as well as to the discovery of model and benchmarking projects). 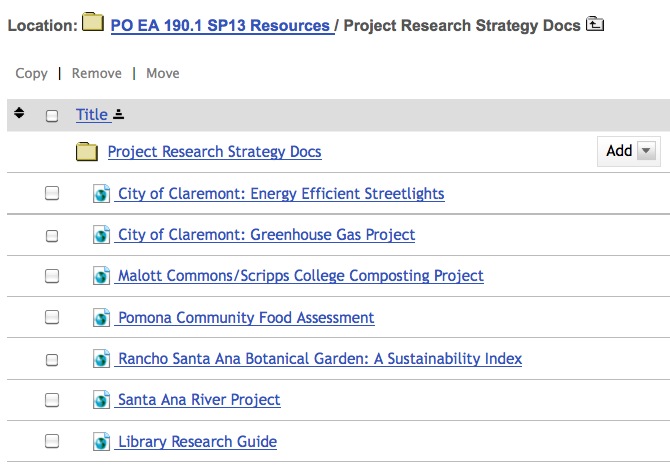 We have discovered in tandem with EA program director (and my namesake!) Char Miller that this process requires conscious/early research delegation as well as ongoing source management to be successful, which is the origin of the collaborative editing strategy. We created an open (aka accessible through a link, no account required) Google doc for each project, linked them through the learning management system (Sakai) for persistent access, and divided the f2f workshop into a largely independent series of research tasks within that doc that each group pursued collaboratively on laptops. Tasks involved collectively brainstorming information needs within each project topic, working out research delegation, and starting to compile a preliminary bibliography of each interest area. The specific steps were as follows:

At the end of the session groups reported out on their work as I showed (with permission) each in-progress doc. This structure worked well for almost all of the groups, particularly those who had a clear focus and had already met with their client, which supported their ability to confidently move forward with research tasks. One group had a confusing scenario they needed to resolve with their client, which made the assignment was virtually impossible to pursue – this team ended up strategizing about how to solve project issues, so at least the time was not lost. Other groups went so far in the space of an hour as to create tabled delegation structures and lengthy source lists.

The different rates/levels of progress through the docs and the independent nature of the group work in the class itself will likely result in our creating a less time-structured approach next year, albeit keeping the same categories of activity. It will be interesting observe at the end of the term how many groups continue to develop the docs for research/project management – at a glance it looks like work has continued in several since the workshop, which implies some degree of ongoing utility. Note: I offered during the session to add students as editors to the Docs, but all are thus far sticking with the open/editable link format.

A final (and not at all sabotage-oriented) example of collaborative editing comes in the form of the second iteration of a Wikiepdia authoring assignment, also described in a previous project curve post that discussed OA thesis uploads. In tandem with the awesome Pomona prof Amanda Hollis-Brusky and my equally awesome colleague Sara Lowe, this term we’re using the same basic structure of small groups creating new Wikipedia articles or filling in stubs on topics relating to American politics in lieu of a traditional research paper. Whereas last year’s project was done somewhat under the official radar, I’m now a Campus Ambassador through the Wikipedia Education Program, which has developed a strong base of educational resources and outreach tools that can help facilitate a successful Wikiepdia assignment, which IMHO provide extraordinary fodder for teaching critical information literacy.

There are many web-based tools that facilitate collaboratage, and I highly recommend experimenting with a few to engage/enliven otherwise educator-focused and potentially isolating learning interactions. And, of course, I would love to hear from others who have had success using similar approaches, particularly in the online arena.

(1) The inspiration for this assignment came from a recent job talk at my work, and while I so much wish I could give credit to its developer it would breach confidentiality without consent. If you’re out there reading this, thank you and please feel free to claim credit in a comment!

2 thoughts on “using collaborative sabotage (aka collaboratage) to teach tech/design/research.”